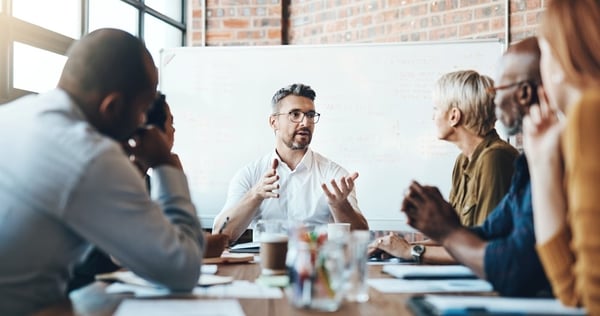 The Power of a Good Debate in the Workplace

When was the last time your management team had a good fight? Perhaps your answer is "never," and you'd like to keep it that way. Or maybe it's commonplace during your strategic planning process, new product launch approvals, and budget meetings.

As the leader, your team's willingness to dissent reflects your comfort level with disagreement. Tension can make us uncomfortable. But internal debate promotes creative thinking and positive change. Ensure your company culture encourages healthy conflict followed by alignment behind ultimate decisions.

Conflict is inevitable when you assemble a talented management team. We each come to the workplace with our experiences, ideas, and egos. And a diverse workforce provides an array of perspectives. But the clash of differing points of view can create unhealthy conflict if not carefully managed.

Sharing different perspectives helps people think creatively. People can venture outside their functional expertise and the limits created by their experience. They challenge and develop upon others’ ideas.

Sharing ideas also helps identify and mitigate risks. Questioning someone’s proposal may point out downsides not previously considered. The team can then determine how much risk they are willing to assume. Finally, they can assess the controls that must be implemented for the idea to work.

But first, you must ensure people are comfortable speaking up. They must be willing to present their ideas and respectfully confront others.

A Culture of Safety

A culture of challenging other people's views doesn't mean that co-workers dislike each other and dread going to the office. It's the converse. It indicates that people feel safe speaking up, are passionate about their work, and respect one another's opinions.

You want team members who are engaged and excited about the company's products and services. They are the ones closest to the action and your customers. Their opinions matter and are important in making good decisions. Expressing those beliefs should be an obligation.

When employees aren't afraid to constructively debate, they are happier about going to work and more satisfied with their accomplishments. They don't have to feel they are walking on eggshells if there are differing perspectives. Co-workers strengthen their relationships when they learn to work through conflict.

Your leadership team is responsible for creating a safe environment where everyone can disagree and debate. If you are the leader, model and support a culture where people are encouraged to speak up without fear of reprisal. Seek out views that are different from yours. Hold your opinions until the end of the meeting after everyone has spoken. Show what it looks like to listen with respect.

Leaders also need to ensure that all participants in a debate contribute. Read the body language to see if someone doesn’t agree with the group’s direction. Then, ask them for their input and draw them into the debate so that their opinions can be heard.

Many people inherently shirk conflict. It's uncomfortable. Some think it indicates incivility. People don't want to be disagreeable – they want to be "nice."

But in the business environment, conflict can symbolize employees' investment in the company's success. They care so much about the organization that they are willing to go to bat to defend their views on improving it.

"Nice" workplaces suffer from a lack of innovation because people are afraid to rock the boat. Employees don't want to challenge the status quo. They won’t question their leaders' ideas.

But innovation and creativity thrive when people pursue process improvement and suggest new ways of doing things. Change can only happen when people are not afraid to speak their minds. Leaders should encourage their team members to push back on management's ideas.

Companies where people question and debate one another's ideas are actually "nice" places to work! Most people are open to hearing different perspectives when it's done respectfully.

By learning to work through conflict together, employees develop closer working relationships. They discover how to disagree and not take it personally when someone challenges their views. And when you don't feel you have to tiptoe around the issues or be afraid to say that the emperor is naked, you feel much better about your work.

Just as everyone comes to work with their experiences and ideas, they also bring their egos. Checking the egos at the door is key to developing a culture of healthy debate.

“For a debate to truly be productive, participants need to be willing to respect every viewpoint and change their minds when necessary.

This is what psychologists call intellectual humility and it’s one of the most important skills a good leader – and productive debater – can develop.”

Showing humility can mean admitting that you are wrong. Employees need to see their leaders change their minds and support views other than their own. Otherwise, the debate will shut down, and the organization will lose the benefit of diverse perspectives.

Teach Your Team to Disagree

Knowing the benefits of healthy debate, how can you encourage your team to engage?

Harvard Business Review’s researchers offer three strategies to argue and still get along:

We are human, so it's easy for constructive conflict to degenerate into personal attacks. Focus on non-debatable facts. Arguing the merits of someone’s opinion can naturally get personal.

Management teams that excel at healthy debate are comfortable working with facts. They routinely use data to manage the business and make decisions. They don't waste time arguing about what might be happening in their operations or the marketplace – they know exactly what's going on. These managers don't debate hunches or second-guess whether a proposal promotes someone's self-interests. They know that all input is solid and supports finding the right solution for the company.

One Team, One Goal

Personal attacks result when others perceive someone is trying to advance their self-interests. Although leaders are naturally vested in the company’s success, there are often underlying personal ambitions and power struggles. The management team needs to rally around a common corporate goal and vision. Managers need to collaborate on making a decision that benefits the entire organization.

“When team members are working toward a common goal, they are less likely to see themselves as individual winners and losers and are far more likely to perceive the opinions of others correctly and to learn from them.

We observed that when executives lacked common goals, they tended to be closed-minded and more likely to misinterpret and blame one another.”

The most successful decision-making processes happen when the CEO is the most powerful executive. The other leaders have authority over their respective areas of responsibility, yet they all participate in making strategic decisions. The group operates as a team, but the most power resides with the chief executive. The CEO may make the final determination.

In contrast, interpersonal conflict is highest in organizations where the senior leadership is weak or autocratic. In those cases, executives are busy jockeying for position and power. It's difficult to make good decisions for the organization when everyone is looking out for themselves.

Decision-making is not about which executive or functional area wins – the objective is to find the best result for the company.

Resentment grows when people think the decision-making process isn't fair. It's easy for managers to assume that the boss has already made the decision or that the course of action is biased. But when people believe the approach is fair, they are more inclined to support the outcome, even if it's one they don’t agree with.

Yet an equitable process doesn't have to mean the group reaches a consensus. This can cause the decision-making process to drag on unnecessarily. A preferred approach is a consensus with qualification. The management team discusses an issue and tries to reach an agreement. If they can't, the most relevant senior leader makes the decision, guided by input from the rest of the group.

What those involved in decision-making want is to have their opinions heard. If they feel that everyone has an opportunity to weigh in, they will accept the outcome, even if it isn't the view they support. Consensus with qualification ensures everyone has input and influence.

Perhaps the most critical part of the debate is what happens afterward. Everyone must be 100 percent behind the decision, especially if it isn’t everyone’s choice. Your leadership team needs to set the example of supporting what’s best for the company instead of what’s best for them or their functional area.