No Medals for Looking Good

Well, the Olympics have ended, and we now have to figure out which of our 930 TV channels will replace the PyeongChang 2018 void. Once again, I got sucked into the excitement of the winter games.

I was lukewarm watching the opening ceremony, as I admittedly haven\’t kept up with the latest “goings-on” with curling, ice dancing, and skeleton. At first, I was drawn in by the heart-tugging stories. The greased-up Tongan competing in cross-country skiing after representing Tonga in taekwondo in the Brazil 2016 Summer Olympics. Lindsay Vonn going for gold, but also spreading the ashes of her grandfather in South Korea where he valiantly served our country in the Korean War. Once I got my emotions intact, it then became all about the fierce competition for medals!

Going for the gold

My apologies to those who think Culture is a conversation we have around the campfire, while holding hands, releasing doves, and listening to ABBA music. Bottom line, it\’s about performance. Think about the milliseconds that separate the best in the 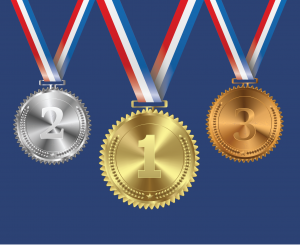 world from the also-rans. Sometimes it boils down to someone wanting it just a little bit more. Someone more consumed and willing to push beyond the limits that trap or limit others. It\’s the same for us in life and business. Our commitment and desire to achieve the end result, drives us to success.

We don\’t get points for trying

I\’ve spent my entire career involved in sales and sales leadership. I love the challenge of selling. Inspiring others to take action. Helping someone achieve something that they set their sights on. Winning vs. losing. I guess, scratch that, I know, I enjoy the pressure to deliver. It\’s a great rush, and so satisfying when you accomplish your goal.

Here\’s the cold reality of selling. It doesn\’t matter how many calls you make, doors you knock on, proposals you deliver, hands you shake, babies you kiss, dinners you buy, or golf outings you sponsor. If you end the week, and then the month, and then the quarter, and god forbid – the year, with a zero in the sales column, you\’ll soon find yourself an ex-salesperson.

It may sound harsh, but it\’s the reality of selling. You must deliver the sale (the result). Athletes don\’t get paid to look good in their uniform. Thousands of athletes have just completed the winter games. They worked very hard to get there. Trained countless hours and sacrificed greatly in pursuit of the ultimate prize. They didn\’t go there to be praised for how hard they worked or how busy they were over the last four years; they went there to compete and to win.

While effort is appreciated, we reward and celebrate results. Set high goals, use measurements to track progress, and hold yourself and others accountable for achieving those results.

If you\’d like to learn more about how to leverage your culture for better performance and results, just give us a call or shoot us an email. It\’s always our pleasure to help. See you in Tokyo in 2020!