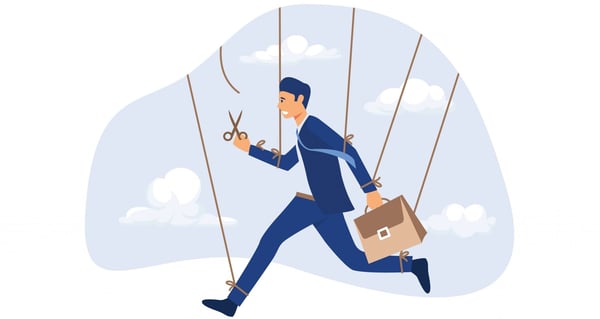 Micromanage Much? Use Company Culture to Drive Performance Instead

Bosses who hover over their teams to orchestrate every move are so prevalent in the workplace that most dictionaries and other resources now include the term “micromanager.” The definitions are never flattering. For example, Gartner’s glossary paints this grim picture of the leadership style:

“Micromanagement is a pattern of manager behavior marked by excessive supervision and control of employees’ work and processes, as well as limited delegation of tasks or decisions to staff.”

Except for the small percentage of people who crave constant direction, employees are generally averse to bosses who supervise or monitor everything they do. And beyond generating resentment, micromanagement is almost always counterproductive; it has the effect of reducing instead of elevating performance.

Since micromanagement is usually detrimental to performance and unpopular with employees, why is this leadership style so pervasive? There are three primary reasons:

Regardless of the reason, micromanagement is rarely a winning proposition for the person in charge. Supervising employees’ every move is exhausting and can lead to other gaps in a leader’s performance.

For example, Data for SEO CEO Nick Chernets notes that focusing too much on employees’ tasks draws their focus away from the big picture. As he points out in an Enterprise League article,

“Managers who feel the need to oversee every process easily miss out on crucial strategic decisions. This can be potentially dangerous for a business because a managers’ job is to make sure each project contributes to the overall strategy. In the long run, this habit can cause severe imbalances in the workplace.”

It’s not hard to understand why employees have a sour perspective about micromanaging bosses. To workers, controlling managers are signaling that they don’t trust them to do their jobs. As a result, they either grow resentful of their managers or begin to feel incompetent and start second-guessing everything they do.

Consequently, micromanagement is almost certain to disengage even the most loyal workers.

Eric J. McNulty, author and Associate Director of the National Preparedness Leadership Initiative, says the “self-determination theory” can partially explain the detrimental effects of micromanagement. In a Strategy + Business article, he writes that this long-established premise about human motivation suggests that people must fulfill three core needs to feel motivated:

Micromanagement, he says, works against all three of these things.

“Shadowing employees’ every move suggests a lack of faith in their ability to do their job well. It also diminishes their autonomy. And it destroys relatedness because each individual feels forced to always concentrate on task completion. It erases any potential for intrinsic motivation and runs counter to the social nature of humans.”

In the same article, McNulty quotes Donna Volpitta, Director of the Center for Resilient Leadership. She believes that the two most fundamental needs of the human brain are security and autonomy, both of which are built on trust.

“When leaders micromanage their employees, they undermine their trust, which tends to breed evasion behaviors in employees. Our brains have two basic operating modes—short-term and long-term.

Long-term thinking considers consequences and relationships and is necessary for complex problem-solving. Short-term is about survival. Micromanagement constantly triggers short-term thinking, which is detrimental to both social interactions and task completion.”

In the current “Great Resignation” climate, droves of people are walking away from jobs that make them unhappy. A significant driver of this attrition trend is bad managers—and overly controlling superiors fall squarely into this category. People get fed up and leave when they feel like they’re constantly under the microscope.

Statistics reinforce this. A survey conducted by Trinity Solutions and published in Harry Chambers’ book, My Way or the Highway, concluded that:

Micromanaging fallout radiates beyond high turnover rates—the ramifications for employees who stick it out with a helicopter boss are bleak.

Some of the harmful byproducts of micromanaging are:

All these conditions lead to higher levels of stress and burnout within a workforce, which can be catastrophic for a business.

Micromanaging limits workers’ capacity to coordinate, collaborate, and develop creative solutions. Ironically, these are areas where employees add their greatest value. But a successful management model creates the conditions that encourage and support individuals rather than stifle them.

The best vehicle for effective management is a powerful company culture rooted in behaviors that strengthen individuals and the organization. To achieve this kind of culture, leaders must first identify and coach the behaviors that can help employees thrive without excessive oversight.

Over time, with effective reinforcement and practice, these behaviors become habits that propel employees to excel independently. They are like an internalized operation manual and become part of the fabric of the workplace.

Examples of behaviors that form a high-performing culture include:

These behaviors are excerpted from a more comprehensive list developed by CultureWise founder David J. Friedman during his decades as a CEO and leadership consultant. He selected behaviors that encourage people to maximize their potential and bring their best selves to work.

To further guide workers, Friedman created succinct descriptions for these behaviors that leave no room for misinterpretation. Together, they form a “common language” that supports everyone in their quest to achieve at a high level.

Defined behaviors like these also encourage managers to grow in their roles. A culture grounded in this kind of conduct helps managers elicit top performance from their teams without exerting extreme control.

There are two significant ways managers can use the list of behaviors as a tool to help employees succeed:

Many people underperform because they’re uncertain about what’s expected of them. And their inability to achieve results prompts their manager to jump in and monitor every detail or, worse, take over tasks. This kind of situation sets both parties up for disappointment.

But when everyone has a set of clearly defined behaviors to emulate, expectations for how people are supposed to work are clear. Of course, managers still need to provide deadlines and goals. But employees will know upfront how to tackle each project because they’re operating in a culture with defined behaviors. And leaders can effectively leverage the behaviors to coach rather than control their team.

This kind of culture creates an environment of positive accountability and gives managers more confidence to entrust their people with responsibility.

So many poor outcomes are a result of a soft skill deficit. Most workers have the requisite qualifications for their jobs. But many never had the opportunity to develop the soft skills people need to succeed. These skills include the ability to effectively:

Often, managers lack adequate systems to teach such soft skills to their people, but they’re still frustrated when employees fail to exhibit them. Consequently, they feel compelled to intervene in their work to make sure things go well. But a culture built on performance-based behaviors helps workers accumulate critical skillsets that empower them to flourish with less supervision.

Successful leaders cultivate a community of workers who connect with, support, and challenge each other. This community includes managers whose goal is to help employees be at their best.

Another benefit of having a culture with defined behaviors is that bad managers can no longer hide behind vague performance standards. Instead, employers can clearly see which supervisors aren’t living up to the conduct they’ve outlined for their workforce, making it much easier to weed out destructive micromanagers.

A culture that positively reinforces high-performing behaviors also develops the next generation of good managers. This kind of system gives employees a blueprint to build their leadership skills and provides avenues for career development.

CEOs can avoid the pitfalls of micromanagement by committing to building a culture that empowers employees and their supervisors to excel. The challenge many of them face is finding an effective method to achieve this goal. David Friedman created CultureWise to meet that need.

Book a free consultation to learn the difference CultureWise can make in the way people work and lead every day. And enjoy a complimentary subscription to Culture Matters for your weekly source of culture-related news articles, videos, and podcasts.