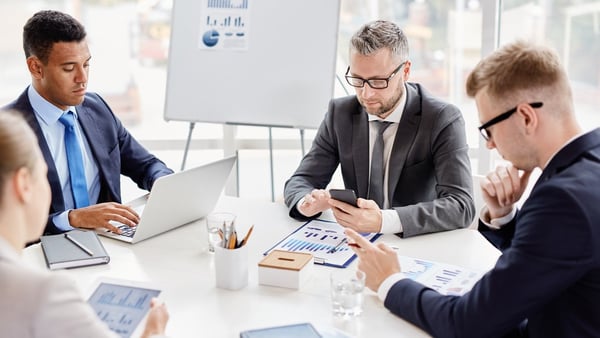 What Your Meetings Say About Your Company’s Culture

Meetings can be stimulating sessions where bright new ideas fly. Or they can be collaborative solution conferences that sort out problems individuals couldn’t solve on their own. And they are often the best way to celebrate achievements or digest bad news as a team.

But let’s face it—we’ve all sat in too many meetings that seem endless and pointless when there are so many other things we need to work on. While well-timed, efficiently run, and purposeful meetings can be very effective, today’s work environment is unfortunately strewn with the kind of assemblies that people dread.

And the caliber of a company’s meetings speaks volumes about its organizational culture. As Bob Pothier, Director of Partners in Leadership and former GE executive, points out in an article for Inc.:

“The strongest message about how you want your culture to perform is embedded in how you conduct your meetings.”

Too many poorly planned and executed meetings reflect a dysfunctional culture. Conversely, productive, inclusive, and timely meetings generate employees’ energy, purpose, and engagement—hallmarks of a vibrant culture. Either way, participants walk away from every session with an experience that radiates throughout the rest of their workday.

Leaders intent on building a high-performing team should examine how their meeting practices can reinforce the culture they desire. Matt Tucker, CEO and founder of Koan, builds on this concept in a column for Quartz at Work:

“Hosting productive meetings isn’t just about the meetings; it’s larger than that. It’s about cultivating the right habits to help facilitate the right conversations, and ultimately nurture a positive culture of purpose and achievement.”

Despite many managers’ best intentions, dysfunctional meetings abound in the workplace. A session can get off track with just one of the following distractions. But often, these barriers to progress coexist and build to the point that the main agenda takes a back seat to the sideshow.

Extraneous discussions between two or more people during a meeting are more common in face-to-face gatherings than virtual ones. But coworkers operating in either format can subvert a meeting by holding sidebar conversations while the leader or others talk about the main topic.

Sometimes two or more members of a meeting will make oblique references to previous conversations or decisions that others weren’t privy to. These insider circles can leave the rest of the party without the necessary information to make meaningful contributions or simply make them feel excluded.

As soon as cell phones and other devices became constant appendages, they gave staff members a conduit to the outside world in what should be insulated meetings. As a result, attendees are frequently distracted by incoming calls and texts. They’re also tempted to do other work or even conduct personal business instead of focusing on the gathering’s agenda.

Dominant personalities that talk without letting others weigh in or interrupt coworkers trying to make a point can quickly throw a meeting off-kilter. Sometimes these people are simply passionate about their ideas and are oblivious to their effect on others. In other instances, the loud voice in the room belongs to someone with an unchecked ego.

This problem can manifest in several ways. Many of the other distractions on this list can cause people to have difficulty focusing on what’s being discussed. But attendees can also fail to listen attentively when distracted by other thoughts, like their to-do lists or after-work plans. Additionally, and far too often, people actively tune others out if they don’t think what they have to say is relevant.

Digression is a disruption that often creeps into meetings. By the time everyone realizes they have frequently strayed off-topic or deviated from the agenda for too long, the session is completely diluted.

Most people will create agendas for scheduled meetings. But critical, last-minute huddles can be frustrating if the leader doesn’t impose a format and limit the conversation to the subject at hand. Even detailed agendas can be problematic if they try to cover too much ground, with the first items soaking up the most attention and the last topics crowded in at the bell.

Along with proper formatting, leaders should be strategic about the staff they include in meetings. Sometimes, while trying to be inclusive, they’ll invite a broader than necessary group to attend. But sessions that include people who don’t need to be there waste precious time that they could be devoting to other important work.

When information-sharing or brainstorming meetings turn into gripe sessions or blame-fests, progress is defeated, and relationships suffer. The point of most meetings is to solve problems, make plans, or devise improvements. These goals get buried if complaints and criticism take center stage.

Sometimes people have valid reasons to come to a meeting late or leave early. But self-tailored involvement can become a convenient pattern when people prioritize other things over sessions with coworkers. Then they are either in the dark about what happened while they weren’t there or waste peers’ time by asking what they missed.

Poorly led meetings generate a host of problems that compound the challenges many managers already face. They include:

Doodle’s Global Survey shows that 43 percent of people leave meetings uncertain of their next steps and specific goals.

In addition to the negative impact bad meetings have on individual work, they also undermine communication lines and collaboration efforts. Distrust and misgivings arise when leaders allow poor behaviors to prevail when their teams get together, leaving coworkers less inclined to support one another.

Even if the meeting environment isn’t toxic, poorly run meetings can still be off the mark. In a Harvard Business Review survey of 182 senior managers, 62 percent said meetings miss opportunities to bring the team closer together.

Employees frustrated by too many poorly led meetings can burn out and grow dissatisfied with their jobs. As a result, they become less vested in their work, and their performance often slips.

The fallout from bad meetings goes even deeper on an organizational level. For example, a study of 20 companies from the automotive supply, metal, electrical, chemical, and packaging industries demonstrated that dysfunctional meetings are associated with lower degrees of market share, innovation, and employment stability.

A schedule overflowing with inconveniently planned meetings is as disruptive as regular participation in dysfunctional sessions. Even if these gatherings are efficient, the sheer volume drastically undercuts workflow and reduces the time staff can dedicate to crucial individual tasks.

One reason meeting overload persists is that both organizers and attendees are caught in a draining “busy is better” cycle. Many managers feel compelled to hold unnecessary meetings out of a misguided sense of duty. Some of their team members attend with their chins up because they want to appear to be good soldiers, while others have a healthy case of FOMO.

For example, a Korn Ferry survey found that 35 percent of respondents would go to a meeting instead of declining even if they knew it wouldn’t be productive.

Too often, excessive meetings are bad company habits, and some teams stay on the treadmill because attending gives them a false sense of productivity. For others, showing up at meetings is a way of looking busy and an excuse to not get things done.

The pandemic and the resulting remote work revolution led to an increased number of meetings. This happened for several reasons:

As assessed by the authors of Harvard Business Review’s article, “Dear Manager, You’re Holding Too Many Meetings,” endless virtual meetings often lead to Zoom fatigue, a condition neuropsychologists say largely contributes to technostress. So instead of improving the work environment and productivity, excessive virtual meetings can deplete morale and deteriorate telecommuters’ well-being.

The Impact of Endless Meetings

Too many meetings are a waste of time and money. Doodle’s State of Meetings Report 2019 found that excessive meetings annually cost the U.S. economy an estimated $399 billion and over 16.5 billion hours—and that was before the recent remote work trend ramped up the quantity of weekly gatherings. The adverse side effects of meeting overload include:

As a result, perfuse meetings can delay output or make people feel like they must take work home or perform it after hours to get things done on time.

How to Cut Meetings Down and Improve their Quality

Harvard Business Review reported that 54 percent of the organizations they studied suffered from a trifecta of meeting dysfunction, citing that their gatherings were:

As the authors noted: “In situations like these, group time is wasted, and individual time is obliterated.” But more importantly, excessive and ineffective meetings denigrate an organization’s culture.

On the bright side, every meeting is an opportunity to drive the positive components of a company’s culture.

Those who organize and participate in them should ask themselves critical questions to ensure the proceedings reflect the culture established by the company’s leader, not detract from it. If the culture is defined by high-performing, cooperative behaviors, the conduct that prevails in the planning and execution of meetings should follow suit.

Some of the behaviors that define a robust culture are perfect fits to generate successful meetings. People in charge of scheduling and running them should ensure that they focus on the following practices:

Make the most of everyone’s time by making sure meetings have a clear purpose and set of goals. Before each meeting, leaders should identify the desired outcome of the session and share it with participants.

Plan judiciously. When meetings are needed, provide and hold fast to a reasonable timeframe, and be mindful of how the session impacts team members’ other priorities.

Be certain that participants understand why they are included and what they will be held accountable for.

Create and circulate a strong agenda well ahead of the meeting. Keep it short enough to ensure that all topics can be addressed with ample attention.

Model and hold the group to a team-first attitude, where individual interests don’t create barriers or compromise everyone’s time.

Reinforce the value of listening and making people feel comfortable sharing their ideas.

Establish that the meeting is only valid if people are all in.

A dynamic culture requires a systematic process to drive and sustain it. Successful meetings are guided by the same method, and leaders should establish guidelines and behaviors to help their teams benefit every time they gather to work together.

Sustaining meeting momentum requires constant scrutiny. After organizations decide the most advantageous structure, frequency, and timing of meetings, they need to regularly assess their effectiveness and make adjustments as needed.

By evaluating with the group how people feel about the gatherings, leaders can help prevent meeting inertia and pent-up frustration, as well as the human proclivity to fall back into bad habits.

One manager at a pharmaceutical company studied by Harvard Business Review reported that these pulse checks are highly insightful: “They surfaced issues that resulted in more cross-coverage, people development, and teamwork—profound implications that reach far beyond the initial goal.”

Organizations that change the way they approach meetings can reap significant benefits. For example, Harvard Business Review studied a financial and regulatory consultancy several months after they made a concerted effort to reform their meeting strategy. A survey of their employees showed a:

But an organization’s concerted effort to revamp its meetings won’t be effective unless its underlying culture supports this kind of change.

CultureWise is a unique system designed to help leaders methodically create the kind of culture that will take their companies to the next level of success. Founder and CEO David J. Friedman based his groundbreaking process to improve culture on the eight-step framework that he detailed in Culture by Design.

Since its inception, CultureWise has assisted thousands of leaders in building cultures that operate more effectively, including making meetings more productive and satisfying. Book a free consultation to learn more about how to build a high-performing organizational culture.

And subscribe to the Culture Matters newsletter for more informative articles, videos, podcasts, and webinar opportunities about how culture impacts business every day.